One of the perks of relocating half way around the world is having a whole new cluster of places on your doorstep! One of the major benefits of living in Vancouver is its proximity to the US where many cities remain on my bucket list. The closest of these is Seattle, located 3-4 hours south of Vancouver and easily accessible for those without a car. A good friend of mine Jamie is also living in Vancouver but heading back to the UK in mid-December. When he suggested going to Seattle over the Remembrance Day bank holiday weekend I jumped at the opportunity.

We decided to get the Amtrak Cascade Train down from Vancouver. A single for the 4 hour journey was about $40 (US). The train left at 6.30am but customs clearance was done in the station meaning we left at 5am to give ourselves plenty of time. The train itself was great, big spacious seats, spectacular views and a good diner cart filled with goodies.

We arrived in Seattle at 10.50am and heading north out of the station towards our hostel for the night! I tend not to stay in hostels anymore but the hostel was putting on a bar crawl that evening so it made sense to take advantage of that service. We chose the Green Tortoise Hostel which was again about $40 for the night. The hostel is well equipped, beds comfy, showers warm (eventually) and they even put on free dinner and breakfast for guests on certain evenings (so double dinners for us haha). The best part of the hostel is it’s location, within eyeshot of Pike Place market which we made a beeline for.

Pike Place market is the biggest tourist hot spot in Seattle. With over 10 million visitors annually it is also the 33rd most popular tourist attraction in the world (what a stat). The market, which opened in 1907 has a wide arrange of food and craft stores including a famous fish monger that throw their fish around the store once  purchased

The smells coming from a number of the stalls were fantastic but none more so than Pike Place Bar-B-Queue. We couldn’t resist tucking into a 9hour slow roasted BBQ pulled pork sandwich! It was that delicious we went back the next day! Pike place was cool but unbearably busy on Sunday (it was more chill on Monday) but had some great stalls.

At this point it started to rain and when it rains it pours (Pacific NorthWest definitely rivals Manchester in that respect) we therefore pushed back some of our tourist plans (including the Space Needle) until the Monday in hope of nicer/drier weather and hit the bars around Capitol Hill.

One thing that is very different in Canada and US is the beer, Bitters/Ales don’t exist or when they do they are ice cold and fizzy, IPAs tingle my taste buds but they are also 6-8% so lethal! After a few hours of drinking and watching American Football (go Pats) we headed back the hostel to freshen up and get ready for the evening.

One of the lads who plays football with Jamie and I (George) was also down in Seattle with his missus (Debbie) and we invited them on the bar crawl! We decided to start at the first bar early and catch up with them. At 9/9.30 the bar crawl started. I met a great eclectic mix of people on the crawl from an Indian businessman here on business to a Maine fisherman and everyone in between.

To be honest the bar crawl was abit of a blur after 12 hours of drinking (we started at 11am) although one of the bars we visited, Linda’s was the last place Kurt Cobain was seen alive which is pretty cool. By 1am Jamie and I were both past a point of no return and took ourselves home.

The next day started on a one way trip down struggle street, my hangovers are getting worse in my old age but we were determined to make the most of the dry weather and see some of Seattle.

The first stop was the new Amazon HQ, as Jamie is a landscape architect he has a professional and personal interest in outdoor urban design! The buildings were pretty cool, like giant see through golf balls. From there we needed food, the basic breakfast at the hostel hadn’t sufficed and we walked base a Jordanian restaurant. We both like kebabs (or kebob as it’s called here) so we decided to go for it! The gyro wrap in pitta was a life saver although I couldn’t match Jamie in washing it down with a few beers (strictly water for now).

The one paid attraction we both agreed in doing was going up the Space Needle. Built in 1961 for the world fair, the Needle towers 600 feet above the Seattle skyline. The cost to the top was $22. As it was a Monday the lines were short and we walked straight into the lift and up in 80 seconds.

The top afforded great views of Seattle, Union Lake and Elliot Bay (2 bodies of water that Seattle is sandwiched between) it was however very windy and my scarf and hat were going all over the place!

After 30 minutes of freezing our butts of we decided to head down and move on to the next location. One place Jamie had been recommended was Fremont located immediately north of Seattle, so from the Needle we hopped on a bus and headed there. The area is famous for the Fremont Troll which was built about 20 years ago under the bridge! The troll has a VW beetle crushed under its arms. It’s completely random but that’s why I like it. Fremont would be a good place to live if you worked in Seattle, it has a number of quirky bars and the Fremont Brewing Company was an obvious destination. I plucked up the courage to have my first beer which went down very very slowly but Struggle Street was coming to an end.

Our return trip to Vancouver was via Greyhound! This was about $25 and on paper takes about the same time as the train (4 hours). With a later departure it made sense to opt for this and I had always wanted to go on a Greyhound like the movies. In truth the bus was cramped, wifi didn’t work and we got caught up in the end of holiday traffic meaning we were about 30 minutes late (not the end of the world but 4h30 on a bus is really boring.

The bus left at 5.10pm so getting back from Fremont at 3.30pm we had an extra hour to go check out the (what’s the name) stadium home of the Seahawks and Sounders who are the leading team in the MLS (they won the MLS cup in 2016 with a blast from the past Clint Dempsey). At this point the rain returned with vengeance. It was still really windy so the rain was literally horizontal and I was soaked, I still am soaked writing this on the bus 3 hours later) thankfully after some choice words for the weather we made it comfortably to the Greyhound station.

The trip back was uneventful and we ended up back in Vancouver at around 10.30pm. It was a great 28 hours in Seattle and a chance to spend some time with Jamie before he heads home. 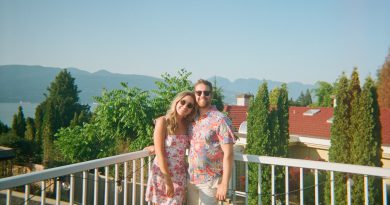